Andrés Cea Galán, born in Andalusia in 1965, completed his studies in Spain. He continued his studies with Jean Boyer in Lille and Jean-Claude Zehnder at the Schola Cantorum Basiliensis. Interested in historical instruments, he emerged as a harpsichordist, clavichord player and organist. He also worked as an organ builder and was involved in organ restorations and the construction of new organs in Spain and France.
Cea is the author of several musicological treatises corresponding to his interests in Spanish keyboard music and organs. He submitted his dissertation in 2014 at the Complutense University in Madrid, which was a detailed study on the Spanish Cifra from the 16th to the 18th centuries. As an editor, he also made early compositions accessible to today’s music practice.
He is leader of the Andalusian Organ Academy. This involves teaching as well as exploring, preserving and promoting the historic organs in southern Spain.
Andrés Cea Galán is active both as an musician and as a teacher in Europe, America and Japan. In these days he teaches Spanish and Portuguese organ repertoire at the Haarlem International Summer Academy. He has made numerous recordings. His CD recordings mainly feature Spanish organ music, including those by Antonio de Cabezon and Francisco Correa de Arauxo. They were all recorded on historical organs, such as in Évora (Portugal), Lerma and Marchena (Spain).

French organist Christophe Mantoux is Professor of Organ at the Pôle Supérieur and the Conservatoire Régional de Paris where he teaches students from all over Europe, the United States, South America, South Korea, and Japan. Prior to his appointment in Paris, he was Professor of Organ at the Conservatoire National de Région of Strasbourg. He also holds the post of Titular Organist at the famous Church of Saint-Séverin in Paris where he has served since 1995.
In 1984, Christophe Mantoux won the prestigious Grand Prix d’Interprétation at the Chartres International Organ Competition (Grand Prix de Chartres). Following that success, he served as Titular Organist of the Chartres Cathedral from 1986 to 1992, and he remains a member of the Artistic Committee of the Chartres International Organ Competition.
His international career as a concert organist has taken him to more than twenty-five countries including countries in Europe, South America, South Korea, Japan, Canada, China and the United States. He has played some of the most prestigious instruments in Europe and in the United States. He was invited to give a week-long teaching residency and present a concert at Yale University, and has also taught at the Europäische Orgelakademie in Leipzig. This week he is professor of the course ‘French Baroque Organ Repertoire’ and the masterclass ‘Repertoire by Jehan Alain and Maurice Duruflé’ at the Haarlem International Summer Academy. 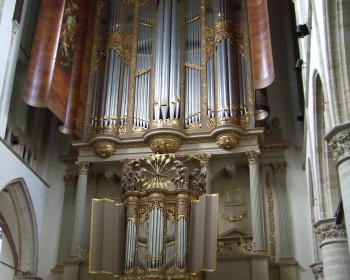