Jazz in the Big Hall

Saxophonist Ben van Gelder and organist Kit Downes are the emerging stars in the worldwide jazz scene. The duo guarantees a stimulating, varied and extremely up-to-date jazz performance at the interface of tradition and innovation. In addition to John Coltrane and Paul Bley, the duo is also inspired by Olivier Messiaen, Jehan Alain and György Ligeti in their improvisations on saxophone and Cavaillé-Coll organ!

With your ticket for this concert you have also access to the concert 'De la Profondeur à la Lumière', starting 8.00PM!

Born in the Netherlands, Ben van Gelder moved to New York at age 17 and spent a decade collaborating and studying with some of the most progressive artists in the world. His teachers included Guillermo Klein, Jason Moran and Lee Konitz. He toured extensively in Europe, Japan and the U.S. In New York, Van Gelder established strong ties with the Jazz Gallery, a venue that fosters artistic excellence and is known as a springboard for talent. A commission from this institution resulted in his latest and highly acclaimed CD, Among Verticals.
Van Gelder won multiple awards such as the Deloitte Jazz Award and the Gold Award granted by the National Endowment for Advancement in the Arts. Van Gelder is currently based in Amsterdam where he teaches at Amsterdam Conservatory.

Kit Downes is a BBC Jazz Award winning, Mercury Music Award nominated, solo recording artist for ECM Records. He has toured the world playing piano, church organ and harmonium with his own bands ENEMY, Troyka and Elt as well as with artists such as Squarepusher, Empirical, Benny Greb and Sam Amidon. He has written commissions for Cheltenham Music Festival, London Contemporary Orchestra, Ensemble Klang at ReWire Festival, the Scottish Ensemble, Cologne Philharmonie and the Wellcome Trust.
Kit performs solo pipe organ and solo piano concerts - and also plays in collaborations with saxophonists Tom Challenger and Ben van Gelder, cellist Lucy Railton and composer Shiva Feshareki. He is also currently working with violinist Aidan O'Rourke, composer Max de Wardener and in an organ trio with Reinier Baas and Jonas Burgwinkel. He teaches at the Royal Academy of Music in London, where he himself studied and now holds a Fellowship. 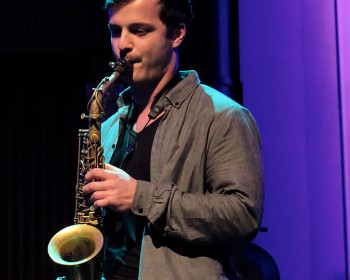