The jury of the International Organ Festival Haarlem has unanimously declared the Italian Gabriele Agrimonti (1995) the winner of the 53rd International Organ Improvisation Competition Haarlem. The Flentrop Audience Award went to Cyril Julien from Switzerland.

The final took place on Saturday evening 24 July in the Grote of St.-Bavokerk in Haarlem with three finalists: in addition to Julien and Agrimonti, also Niklas Jahn (Germany).
The first assignment was a free improvisation of about 12 minutes around a theme that Jean-Pierre Leguay, composer and organist of Notre-Dame in Paris, composed especially for the competition. The second consisted of a free duo improvisation of approximately 8 minutes with saxophonist Ties Mellema and technician Frank van der Weij, also using samples and electronic sound effects.

During the preliminary rounds, the eight participants from five countries were given innovative challenges in addition to traditional improvisation assignments. In the first round they had to make an improvisation on the Adema organ in the KoepelKathedraal on the unfinished painting 'Victory Boogie Woogie' (New York, 1942-44) by Piet Mondriaan (1872-1944). During the second round, the six remaining participants were instructed to play the accompaniment to a video by Marcel Wierckx on the Ahrend & Brunzema organ in the Doopsgezinde Kerk.

The prize of the competition consists of a sum of money and invitations to concerts in the Netherlands and various cities in Europe. The audience award was awarded by Flentrop Orgelbouw B.V. available.

Gabriele Agrimonti (1995) started his musical education at the age of 11. In 2016 he obtained his master's degree cum laude from the conservatory of Parma. Already at the age of 13 he became co-titular organist of the Basilica Magistrale di S. Maria della Steccata in Parma. In 2016 he was admitted to the Conservatory of Paris where he is currently studying improvisation and composition with Thierry Escaich, Laszló Fassang and Thomas Lacôte, among others. He attended masterclasses with prominent organists such as Olivier Latry and Jean Guillou. In 2018 he was also a finalist of the Haarlem Improvisation Competition. In 2019 he won the first prize (Tournemire Prize) of the Improvisation Competition in St. Albans (UK) 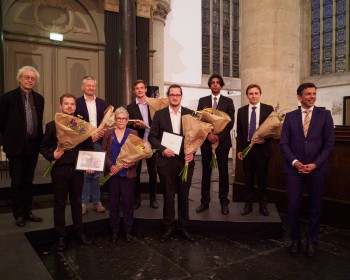