The 51st edition of the International Organ Festival Haarlem, which took place from 16-30 July, attracted more than 9800 visitors – yet another record after the highly successful 50th anniversary festival in 2014. The numerous concerts and public events focused on the many historic organs in Haarlem and famous instruments in Zwolle, Doesburg, Zutphen, Rotterdam, Leiden and Alkmaar. The programmes ranged from 16th-century repertoire to the world premiere of Jimmy Smith in Paradise (for organ and percussion) by Gavin Bryars.

Central to the first week of the festival was the 51st International Improvisation Competition. Conspicuous innovations included improvisation assignments inspired by poetry, silent movies and graphic art, and a duo-improvisation with a percussionist. Considerable attention was also devoted to improvisation in recitals, masterclasses and lectures. The monumental church of St Bavo was among the venues of duo-recitals, each featuring two renowned guest organists of differing backgrounds: the large audiences were able to enjoy international events of outstanding artistic merit.
The International Improvisation Competition was won by the Dutch organist Geerten Liefting. In addition to a sum of money he received invitations for recitals in Paris, Toulouse, St Albans, Ratingen and Amsterdam (the Orgelpark), among other places. In 2018 he will return to perform at the next Haarlem Organ Festival.
The Summer Academy – an intensive programme of masterclasses for professional organists and music students – likewise attracted a record number of nearly 120 mostly young participants from more than thirty countries and all continents, this year including once more a striking number of Asians. The

Young Talents masterclasses were attended by eight players aged 13-18 from Portugal, Holland, Italy, Austria, USA and China. The invitation to young composers to take part in the Young Composers masterclasses resulted in fascinating pieces by composers from Chile, Letland, South Korea and Greece.
At the festival’s opening concert an arrangement of Carl Orff’s 'Carmina Burana' was performed by the organist Jan Hage, the professional choir Consensus Vocalis, soloists and Slagwerk Den Haag, directed by Klaas Stok. It was broadcast by the Dutch radio society Omroep Max, along with other concerts including music by Frank Zappa and the festival premiere Jimmy Smith in Paradise by Gavin Bryars. The latter work was commissioned in collaboration with Toulouse-les-Orgues and the Orgelpark Amsterdam. 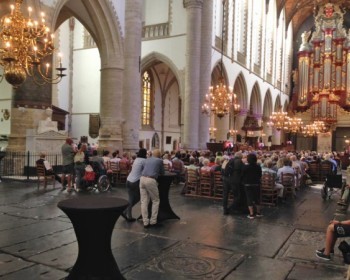