Composer and organist Franz Danksagmüller unites a broad musical spectrum in his innovative projects, compositions and live electronics performances.
His work continually sounds out links between historic and contemporary music, between classical musical instruments and their modern electronic counterparts.

Franz Danksagmüller performs as a soloist and as part of various musical ensembles.
In recent years, he has given guest performances as an organist and performer at the Elbphilharmonie in Hamburg, the Konzerthaus Berlin, the Palace of Arts in Budapest, the Orgelpark in Amsterdam, the Organ Festival Holland in Alkmaar, International Organ Festival in Haarlem, at the Festival Musica Sacra in St. Pölten and the Sinus Ton Festival in Magdeburg.
His compositions have been played at the competition for the Paul-Hofhaimer-Preis in Innsbruck, at the International Organ Festival in Alkmaar, the Rainy Days Festival at the Philharmonie Luxemburg and the Carinthischer Sommer in Ossiach (Austria), at the Silbermann Tage in Freiberg and the ECHO competition in Treviso.

In his genre-spanning and interdisciplinary projects, Franz Danksagmüller has collaborated with scientists and diverse artistic personalities, including bass-baritone Klaus Mertens, composer and creator of the Kyma, Carla Scaletti, and duduk player Gevorg Dabaghyan.

The project buxtehude_21 was the result of a 2016 collaboration with saxophonist Bernd Ruf. The two musicians use ‘comprovisations’ to build tantalising bridges between baroque and contemporary music. The project has been critically acclaimed as a ‘captivating adventure in sound’.

In the musical theatre piece Just Call Me God with John Malkovich in the leading role, Franz Danksagmüller collaborated with Martin Haselböck. In 2017, the ensemble guested at a range of venues, including the Hamburg Elbphilharmonie, the Wiener Konzerthaus, the Concertgebouw Amsterdam, the Union Chapel in London and the House of Music in Moscow.

His latest projects combine his own compositions with visualisations and film recordings. They include sounding science – multiple compositions based on scientific, mathematical and demographic data, broken Bach – a live remix of baroque music for organ and live electronics, and dávny – a composition of sounds and images from abandoned places and defunct instruments.

Franz Danksagmüller studied organ, composition and electronic music in Vienna, Linz, Saarbrucken and Paris. His teachers include Michael Radulescu, Daniel Roth, Erich Urbanner and Karlheinz Essl. He was awarded an Appreciation Award from the Austrian Federal Ministry of Science and Research in 1994, and he has won prizes at various international music competitions. He has performed with the Wiener Symphoniker, the Camerata Salzburg, the Berliner Symphoniker, the Hamburger Symphoniker, the Orchestra of Birmingham, the ORF Vienna Radio Symphony Orchestra, ‘die reihe’ ensemble and the Arnold Schönberg Choir. Furthermore, he has worked with many famous conductors including Sir Simon Rattle, Michael Schønwandt, Erwin Ortner and Ton Koopman.

From 1995 to 2003, Franz Danksagmüller was a lecturer at the University of Music and Performing Arts in Vienna. From 1999 to 2005, he was organist and composer at the Cathedral of St. Pölten, Austria, and since 2005, he is Professor of Organ and Improvisation at the University of Music Lübeck.
He acts as a juror at distinguished organ competitions, including Haarlem, Alkmaar, Lübeck and St. Albans.
Since 2015, he is a visiting professor at the Xi´an Conservatory of Music in China, and from September 2018 at the Royal Academy of Music in London. 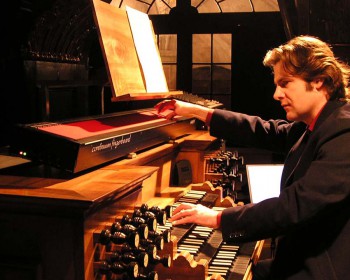 Improvisation: Styles of the 20th and 21st centu